"A safer walk to a brighter future" 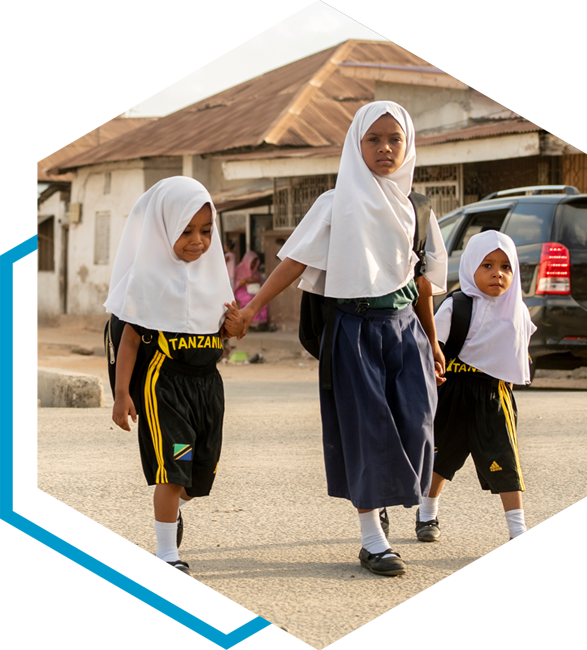 The lack of safe pedestrian routes in Dar es Salaam and other African cities means children in the region are twice as likely to die or be injured in road accidents than children globally. Every year, 1.35 million people die from road crashes. Pedestrians, cyclists and motorcyclists account for 80% of deaths in low and middle-income countries.

Create safer school zones in areas of high risk using fast-acting, low-cost and evidence-driven infrastructure, behavior, and policy changes that deliver quick wins and give policymakers a roadmap to safer cities for all road users.

Fewer fatal and near-fatal traffic crashes among school children, who are now able to save their energy and focus for the classroom, and safer roads for other pedestrians, who are the majority of road users in Africa.

Cost-effective and replicable, SARSAI is yielding quick wins that save lives while laying the foundation for longer-term policy and institutional change by producing reliable evidence of change.

Amend is a small non-profit with offices in Ghana, Mozambique and Tanzania that uses SARSAI, an evidence-driven package of interventions that includes infrastructure improvements, behavioral education and advocacy, to decrease child road traffic injuries and deaths in Dar es Salaam and other fast-growing sub-Saharan African cities.

Dar es Salaam is one of Africa’s fastest-growing cities, on track for 20 million residents by 2050. But it and other cities across the region are struggling to keep up with the safety and road infrastructure demands of rapidly growing and motorizing populations. Children must navigate a chaotic and dangerous mix of fast-moving vehicles, on foot, without safe pedestrian routes in order to get to school. Many are killed in road crashes, while injuries force others to miss school or leave them with life-long disabilities.

When Amend started in 2005, there was little attention paid to child road traffic injuries in the region and no reliable data on the magnitude of the problem. Amend’s initial interventions, focused solely on education and behavior change, proved insufficient in reducing roadside crashes. In 2012, Amend launched SARSAI at two schools in Dar es Salaam, with support from the FIA Foundation. The team first identified the most at-risk schools using public data and community reporting. Then the Amend team, which included community relations experts and road engineers, developed tailored infrastructure modifications designed to reduce risk hot spots for each school area, including new footpaths, zebra crossings, bollards, speed humps, and routes that travel along less busy roads. At the same time, they taught the children at each school crucial safety practices. 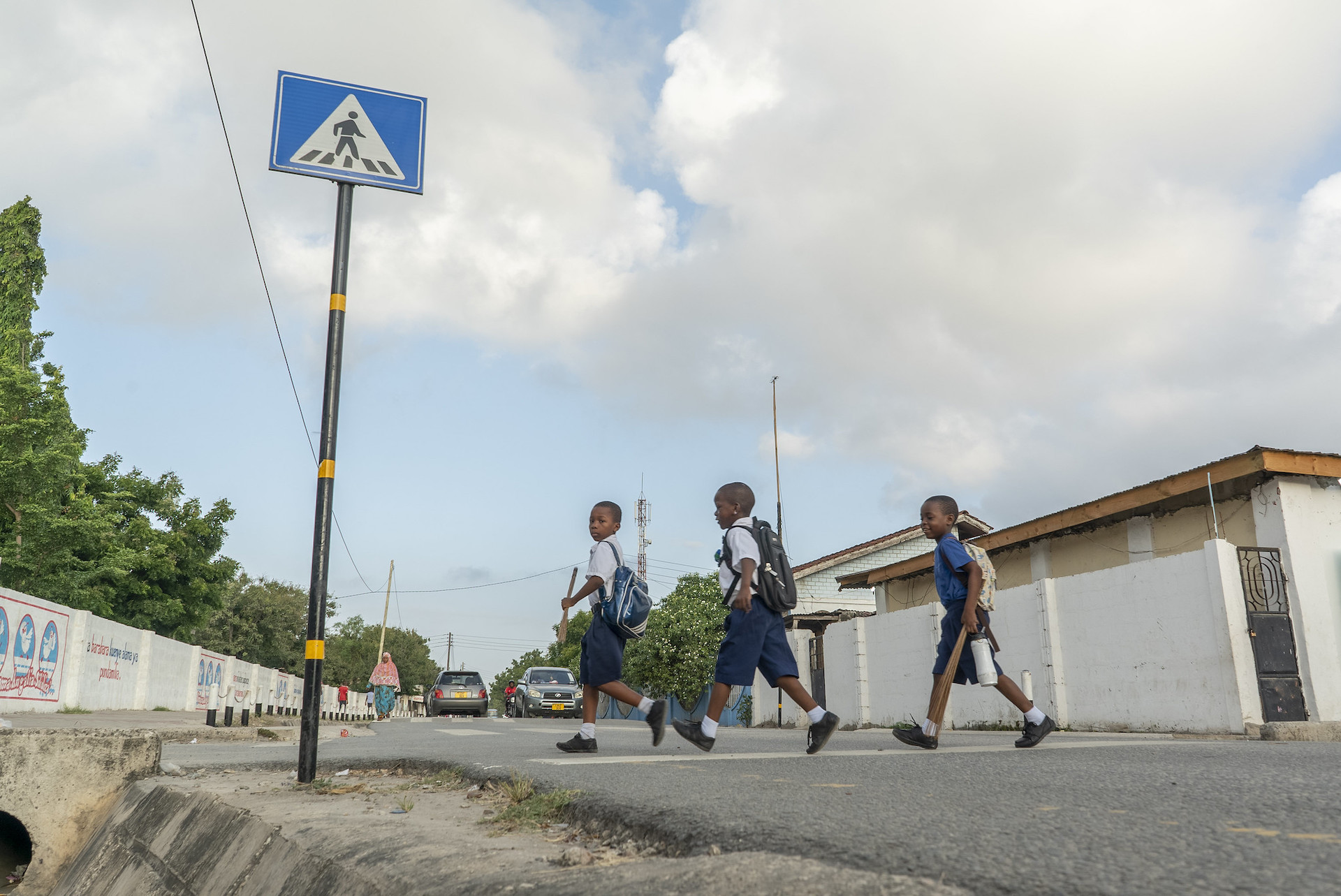 Between 2013 and 2014, Amend expanded SARSAI to more schools in Dar es Salaam and built key relationships with local authorities, who approved the technical plans in each case. Community members – including teachers, parents and municipal engineers – also became active participants in SARSAI, from the benchmarking of injury rates to follow-up monitoring and educational courses.

Amend’s partnership in 2015 with the U.S. Centers for Disease Control and Prevention helped cement the credibility of the approach. With the CDC’s support, Amend carried out a population-based, randomized control study of 18 schools in Dar es Salaam, based on a sample size of more than 13,000 school-aged children. The study, published in the British Medical Journal in 2018, showed a 26% reduction in road traffic injuries at schools that received the intervention. After one year of study, SARSAI interventions were brought to the control group as well. 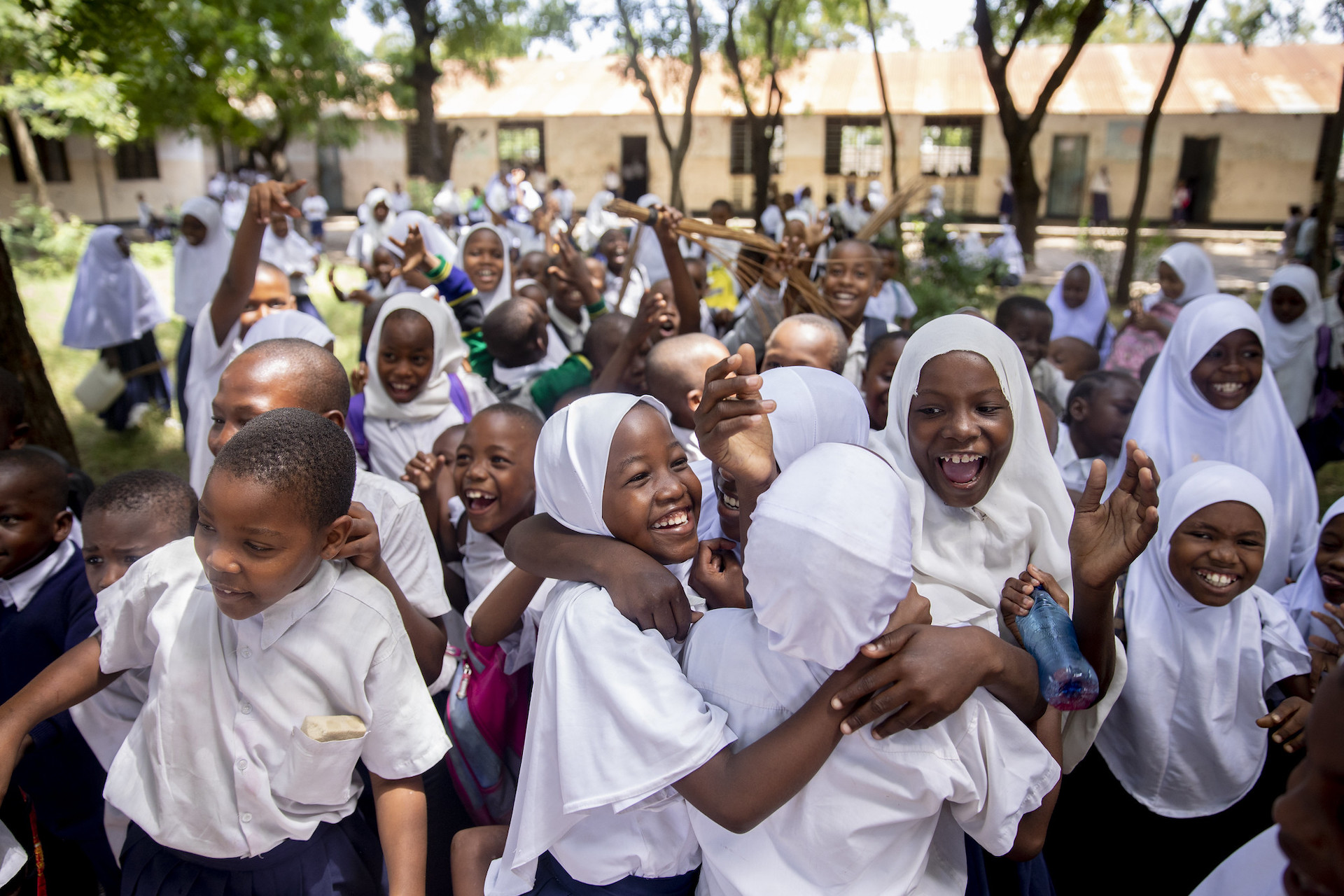 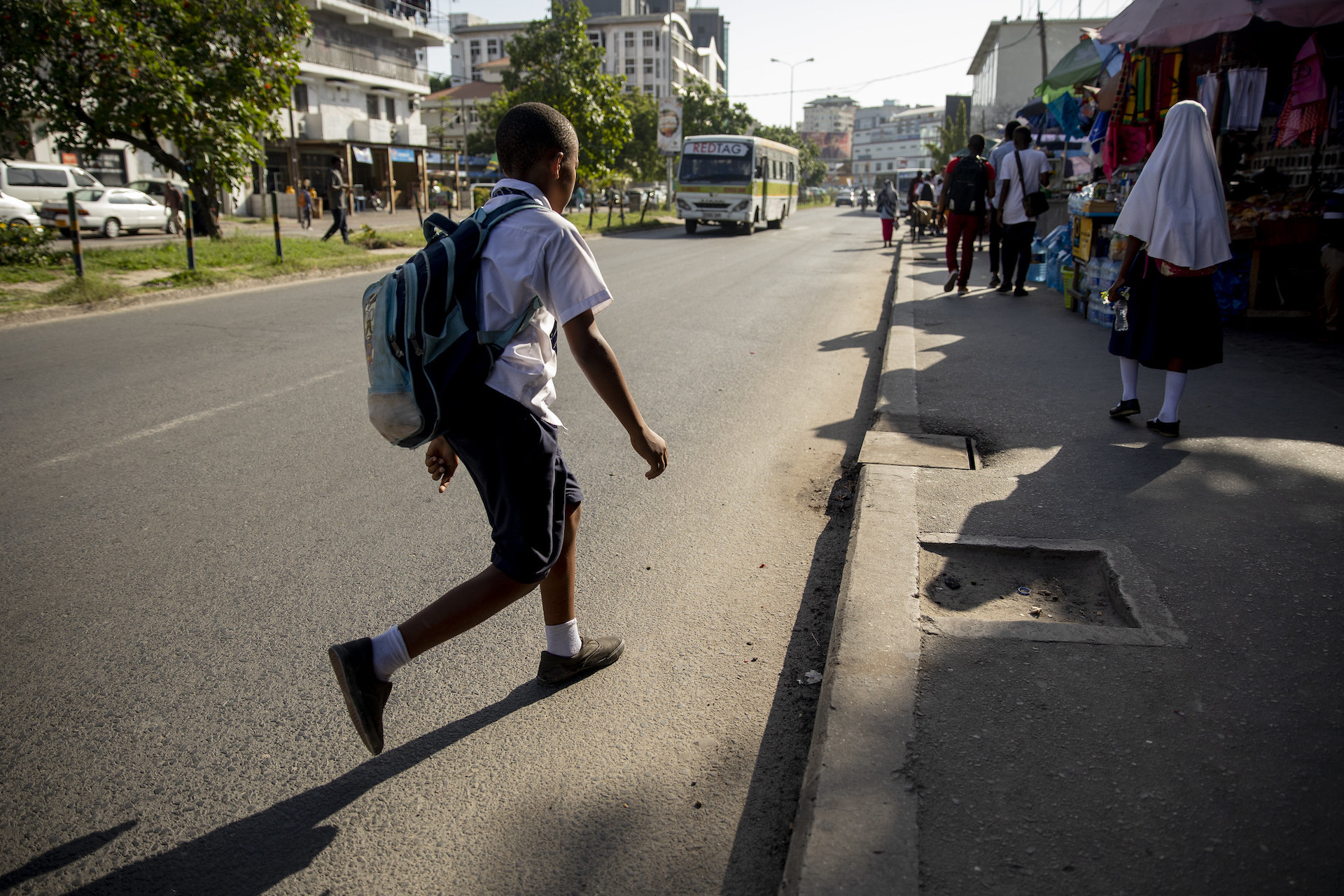 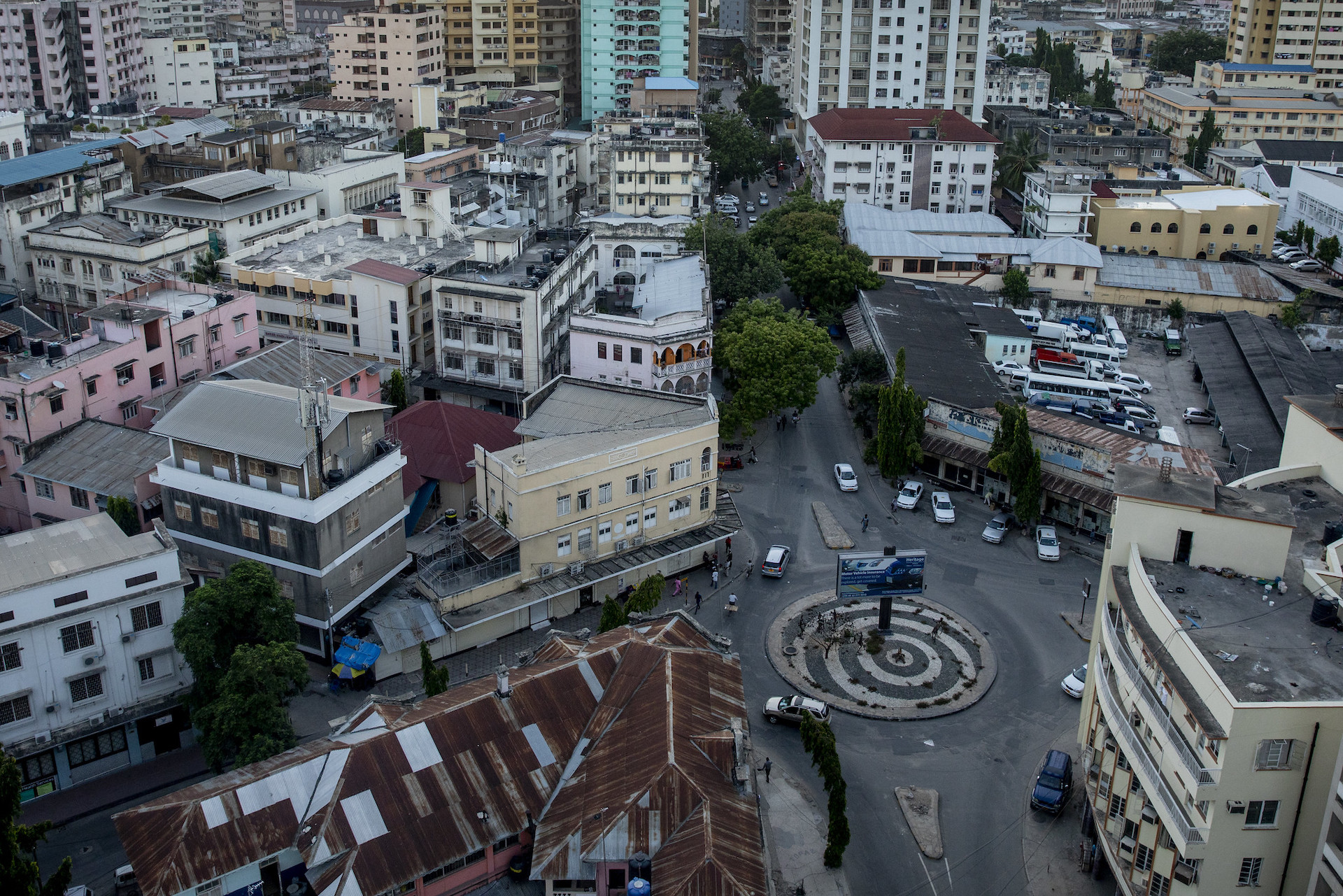 In 2017, following a $1.7 million grant from the FIA  Foundation and the Puma Energy Foundation, Amend began expanding SARSAI to other cities. It has now brought the program to more than 50 high-risk school areas in nine sub-Saharan African countries. In Dar es Salaam, Amend continues regular incident monitoring and retrofitting of high-risk schools while building capacity among public officials to embed children’s safety measures into roads as they are built.

SARSAI used data to convince communities and people in power about the effectiveness and importance of interventions that affect children. These are the tools that help governments make informed decisions.

The winning project in many ways exemplifies how local reality is, but also how universal the problems and the frame necessary to address those problems are.

Children and the poor are the ones brutalized by poor planning. SARSAI has created a consciousness that is very powerful. It’s very visceral, emotional. It’s about mortality, making it less brutal, giving people a quality of life.

Safety in the context of school is one of the underappreciated elements of the urban problem. People want to be educated. You need a school to do that. But you also need to be able to get to the school, and in many urban environments, that poses the single greatest difficulty, whether you’re talking about Africa or you’re talking about the United States or Europe.

SARSAI gives you so much to build upon for the future. This is about innovation. That’s what will spread.

Cut traffic speeds in school zones up to 60%